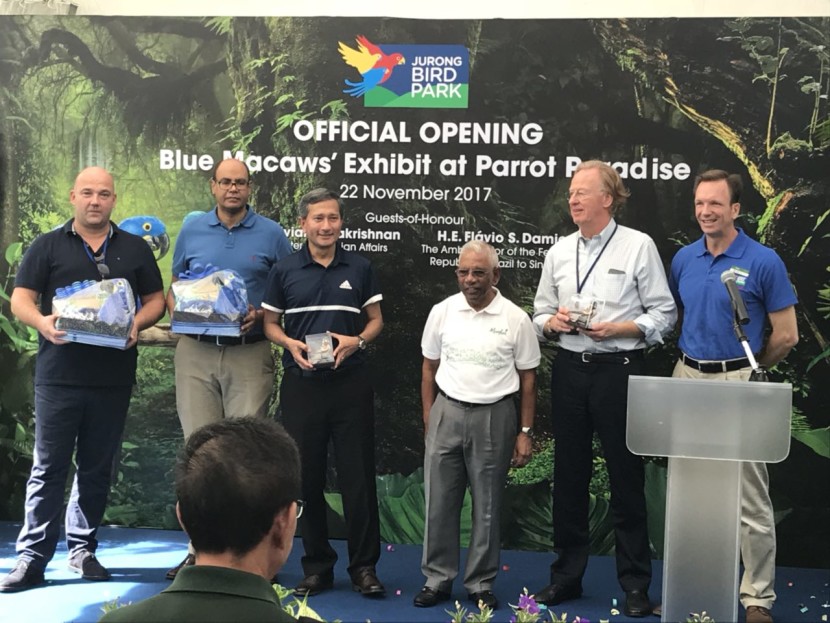 Today was another mile stone for the Blue Macaw conservation, especially for the highly threatened Spix’s Macaw.
The Jurong Birdpark in Singapore, partner of the Spix’s macaw recovery group, opened the Blue Macaw exhibition at the Parrots Paradise. During the official ceremony the Hon. Minister of foreign affairs Dr. Vivian Balakrishnan, the ambassador of Brazil H.E. Flavio S. Damico, CEO of Wildlife Reserves Singapore Mike Barclay and head of ACTP Martin Guth cut the blue ribbon to officially launch the opening. This is the first and only ambassador facility, where visitors can see the threatened little blue Macaw and learn about its conservation project. The species is considered to be extinct in the wild since 2000 and the main goal of all project partners is to reintroduce the birds in their natural habitat in Brazil shortly.
Now everyone has the chance to see the special Macaws in Singapore. And more than that.
It is also the only facility, where you can find all of the three blue Macaw species next to each other. Besides the Spix’s macaw you can also have a look at the threatened Lear’s and the Hyacinth Macaw. They are much bigger in size, but as gorgeous as the Spix’s.
Take the chance to see this amazing parrots in Singapore and learn how to protect them...
Once again we would like to thank the Jurong bird park for organizing such an amazing and very emotional event and we are looking forward to working together with the whole team to protect the blue macaw species!