A SMALL BLUE MACAW CONSIDERED EXTINCT IN THE WILD

The smallest of the blue macaws, the Spix's Macaw gained international attention in 2011 via the Hollywood animated movie “Rio”, with the supposed last two Spix's Macaws in the lead roles. Unfortunately in real life, the species has been considered extinct in the wild since the year 2000. Today, only around 160 birds exist in captivity, making the Spix's Macaw the rarest parrot in the world, with even the New Zealand Kākāpō now officially numbering more. Together with the Brazilian Government, ACTP actively engages in the breeding and conservation of this beautiful bird and we are working towards its reintroduction back into the wild.

Construction of the purpose built Spix’s Macaw Release, Breeding and Research Centre (RBRC) on land within the Spix’s historical habitat in the Caatinga is now well underway, with completion estimated mid-2019. Upon completion we will commence the transfer of birds from Germany to the RBRC in preparation for the first release of Spix’s into the wild, which is planned to take place in 2021.

A test release of Illiger’s Macaws, another small macaw that inhabits the Caatinga, is planned for 2020; this will allow us to fine tune our release procedure and test all of the related equipment, including telemetry devices, prior to releasing the first Spix’s. It is imperative that we collect as much data as possible from this test release in order to gain further knowledge and give the Spix’s reintroduction the best possible chance of success.

The day that we will see the Spix’s Macaw flying free in the Caatinga once again is fast approaching! 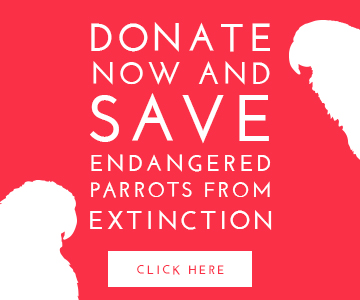 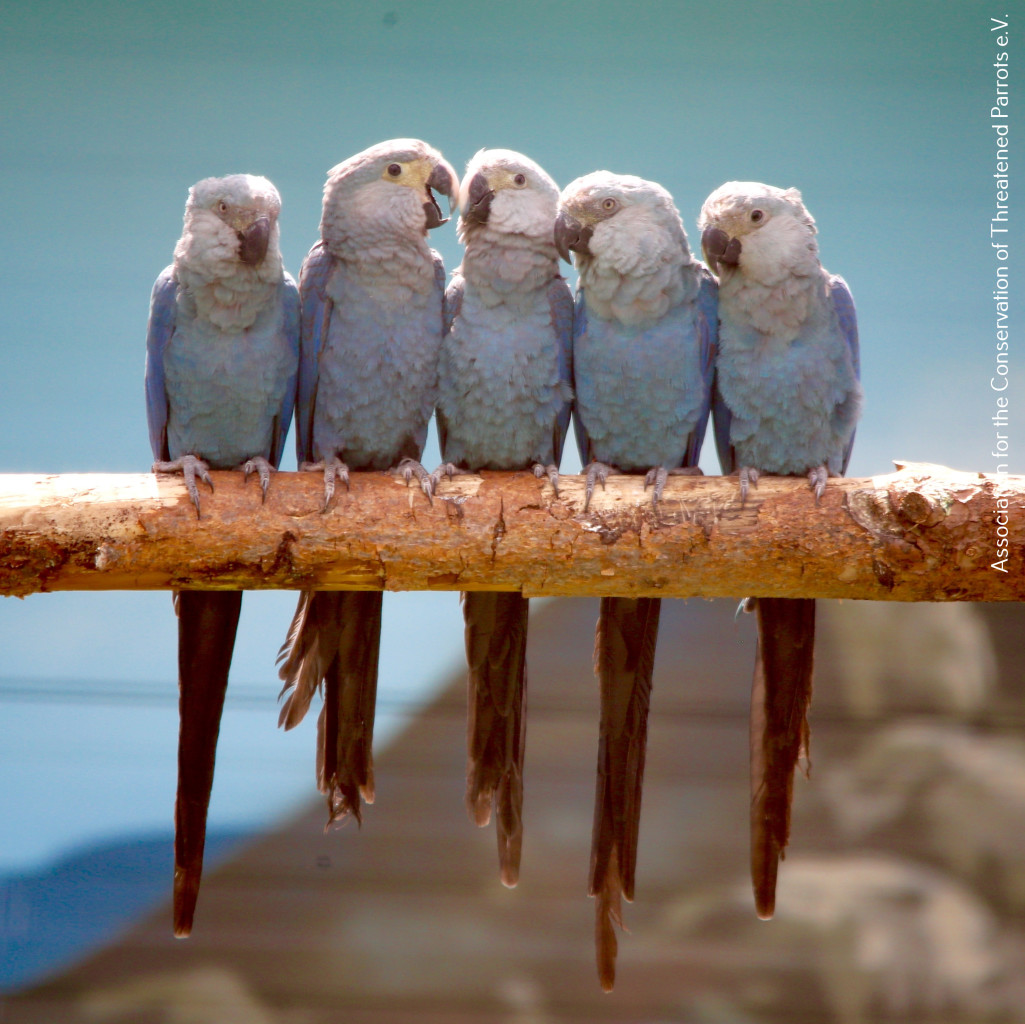 The Spix's macaw Cyanopsitta spixii is an endemic Brazilian parrot, first discovered and documented by the German naturalist Johann Baptist Ritter von Spix on his Brazil expedition in 1819. Already at that time, this small blue macaw was considered particularly rare and prior to the disappearance of the last wild bird in the year 2000, only a few people were ever able to observe the bird in the wild.

Only a little is known about the life of the Spix's Macaw in the wild, with a very small amount of documented evidence found within ornithological literature. In the middle of the last century the species was already considered extinct, until it was spotted again in 1986. Three birds were observed - perhaps the last three of their kind - near Curaça in the north of Bahia state, Brazil. Their offspring were probably captured in the 1980's and offered for sale in the US and Europe at high prices. It is likely that these birds form the basis of today's population in captivity.

EXTINCT IN THE WILD

In 1990, only one Spix's Macaw could be found in the wild, living together with an Illiger’s Macaw Primolius maracana. Since the year 2000, the species has been considered extinct in the wild. In addition to illegal trafficking, the destruction of habitat due to human influences was the main reason for the extinction of the species. Today only around 160 Spix's Macaws exist in captivity worldwide.

The long-term goal of the Brazilian Government, ACTP and our other partners in the Spix's Macaw Program, is the reintroduction of the species back into the wild by the year 2021. In order to achieve this goal the following wildlife protection measures are being pursued:

The primary objective of the Spix's Macaw protection measures is to grow the captive population so it is large enough for the reintroduction of the species back into the wild. The current population is now very close to being large enough and strong enough to allow for a successful and sustainable reintroduction. Due to the small number of birds that formed the basis of the captive breeding program the preservation of the genetic diversity of the population has always been very challenging, however through dedication and hard work we have managed to improve things greatly in this regard.

Suitable areas must offer optimal conditions for the birds and be protected against further influences of humans. For several years, intensive efforts have been undertaken to search for suitable areas in the Caatinga region. With funds from ACTP, the Lymington Foundation and Parrots International, a farm was purchased, which includes the area that served as the habitat of the last wild Spix's Macaws. The farm, as well as surrounding areas, are planned to form the future protective area for the reintroduction of the Spix's Macaw back into the wild.

On the 5th of June 2018, during World Environment Day, the then President of Brazil, Michel Temer, signed a decree that is extremely important for the Spix’s Macaw and other species that share its previous habitat. He signed off on a wildlife refuge and environmental protected area that spans 120,000 hectares in the municipality of Curaçá in the state of Bahia, Brazil. This area includes some of the historic range of the Spix’s Macaw and the protection of it will greatly improve the chances of their reintroduction back into the wild.

Particularly intensive sensitisation of the local human population continues to be conducted in preparation for the reintroduction and the future coexistence between man and the Spix's Macaw. A wide range of awareness-raising activities are being carried out in the vicinity of the planned reintroduction area to teach the local people the importance of this small blue macaw for their region.

As an official partner of the Brazilian state organisation ICMBio (Instituto Chico Mendes de Conservação da Biodiversidade), ACTP supports the Spix's Macaw program through our own Spix's breeding program in Germany, as well as our participation in conservation activities on site in Brazil.

ACTP is an official partner of the Brazilian Spix's Macaw Breeding Program led by ICMBio, working jointly towards the goal of reintroducing the species back into the wild by 2021. At our breeding facility in Germany, our team works on the successful breeding of these rare parrots. We also consistently promote the broadening of the genetic diversity of the species.

In collaboration with universities and other scientific institutions, we are also implementing the use of artificial insemination to increase the breeding success.

Thanks to a dedicated team and enthusiastic supporters we have been able achieve remarkable success in our breeding efforts with the Spix's macaw:

To strengthen the cooperation and to increase breeding success and genetic diversity, ACTP and ICMBio exchange birds as part of the breeding program: 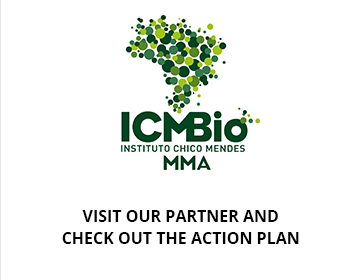 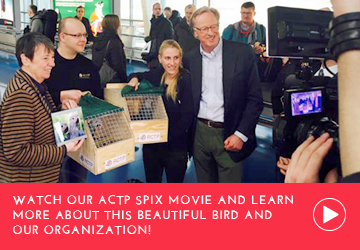 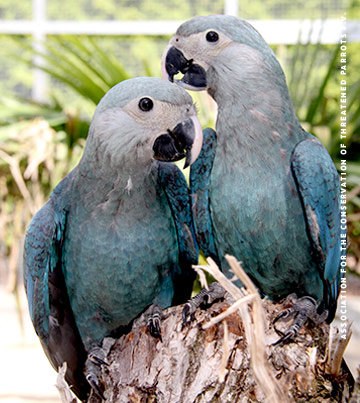 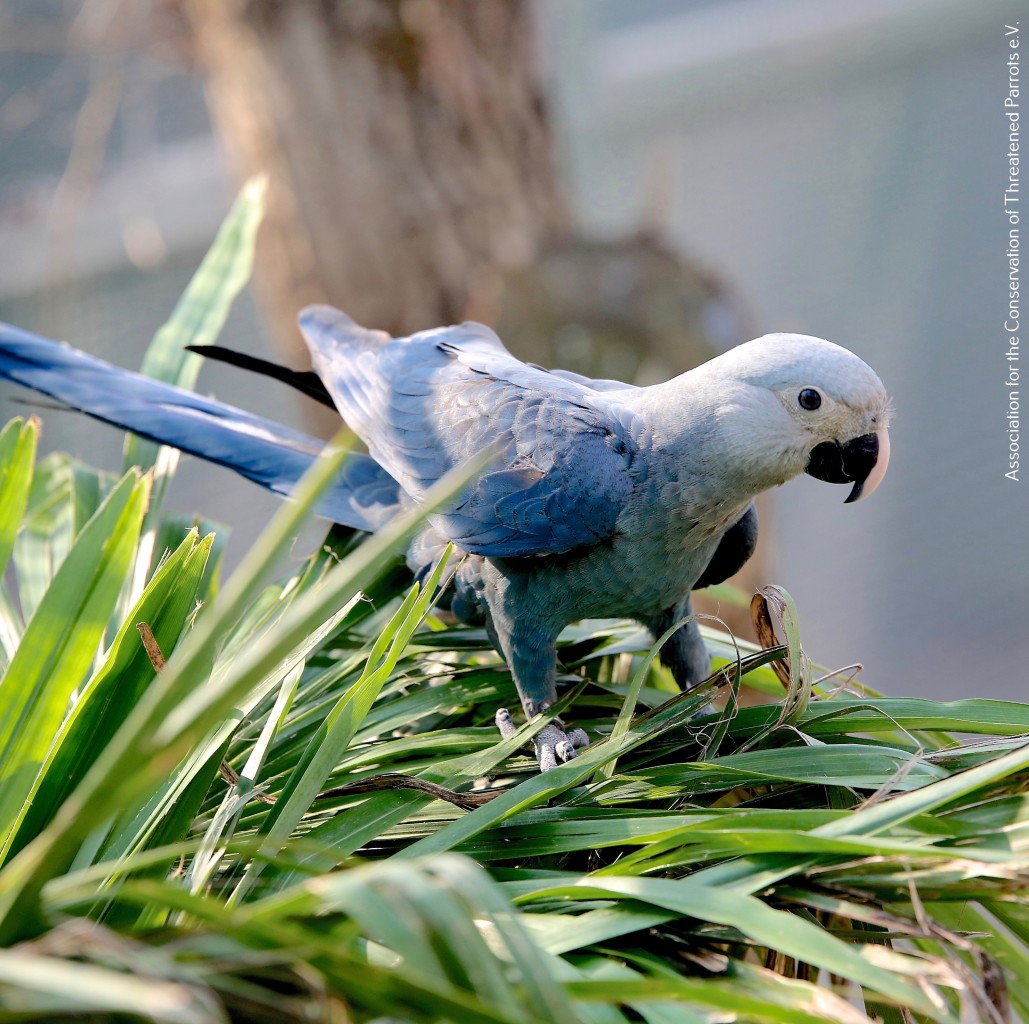 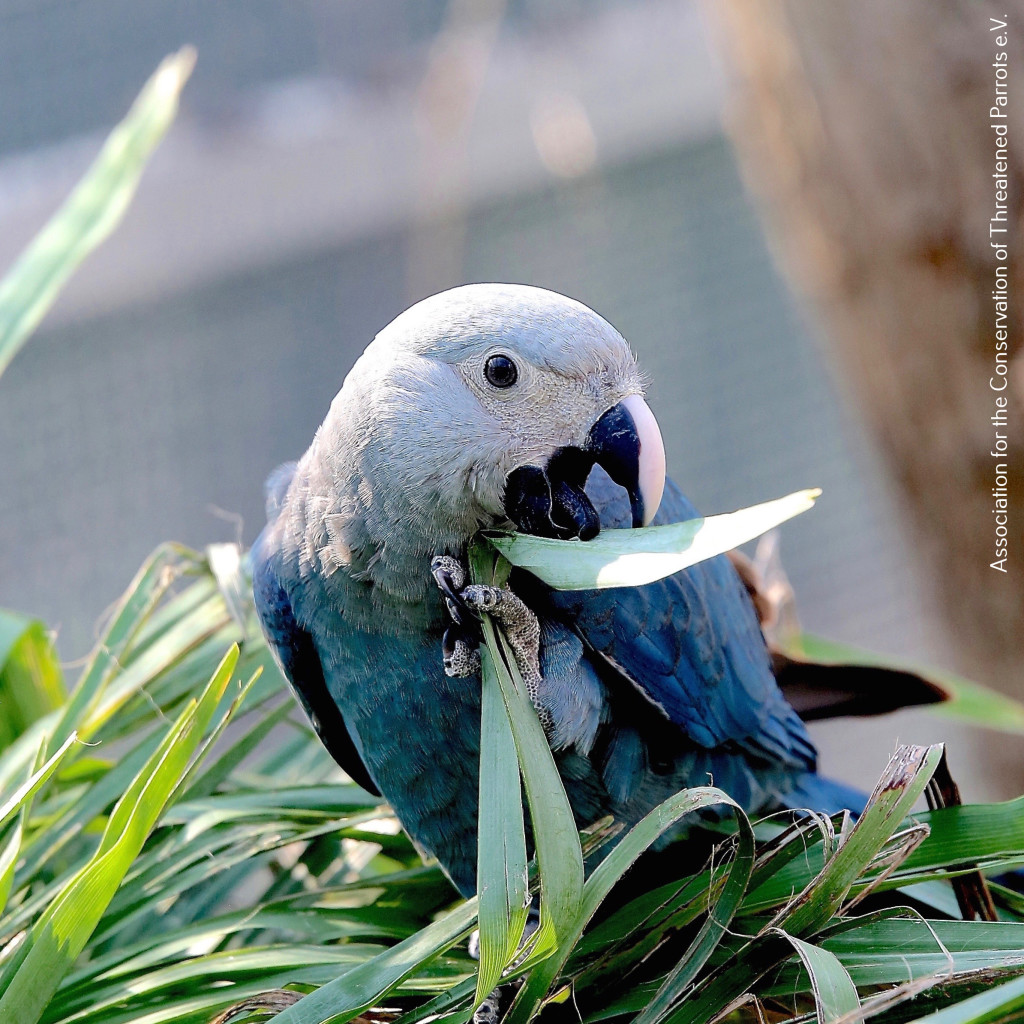 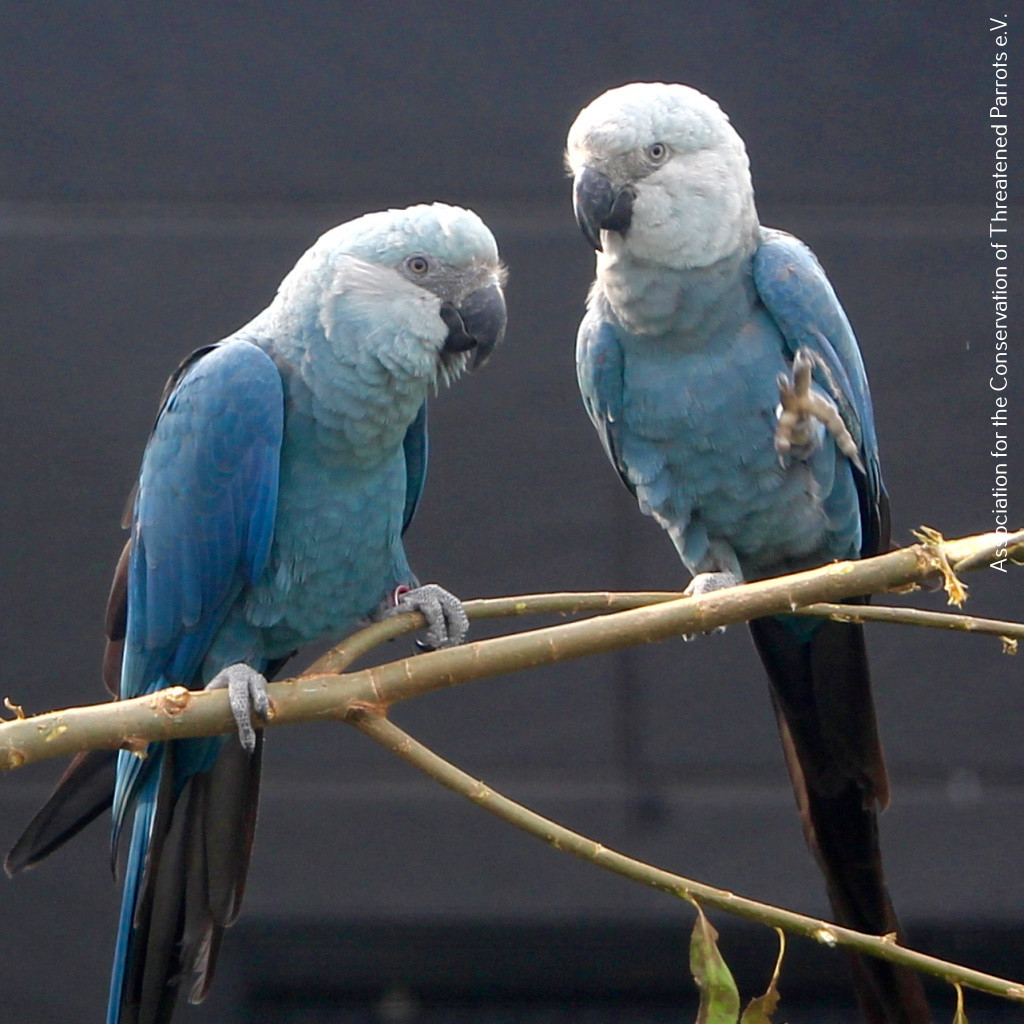 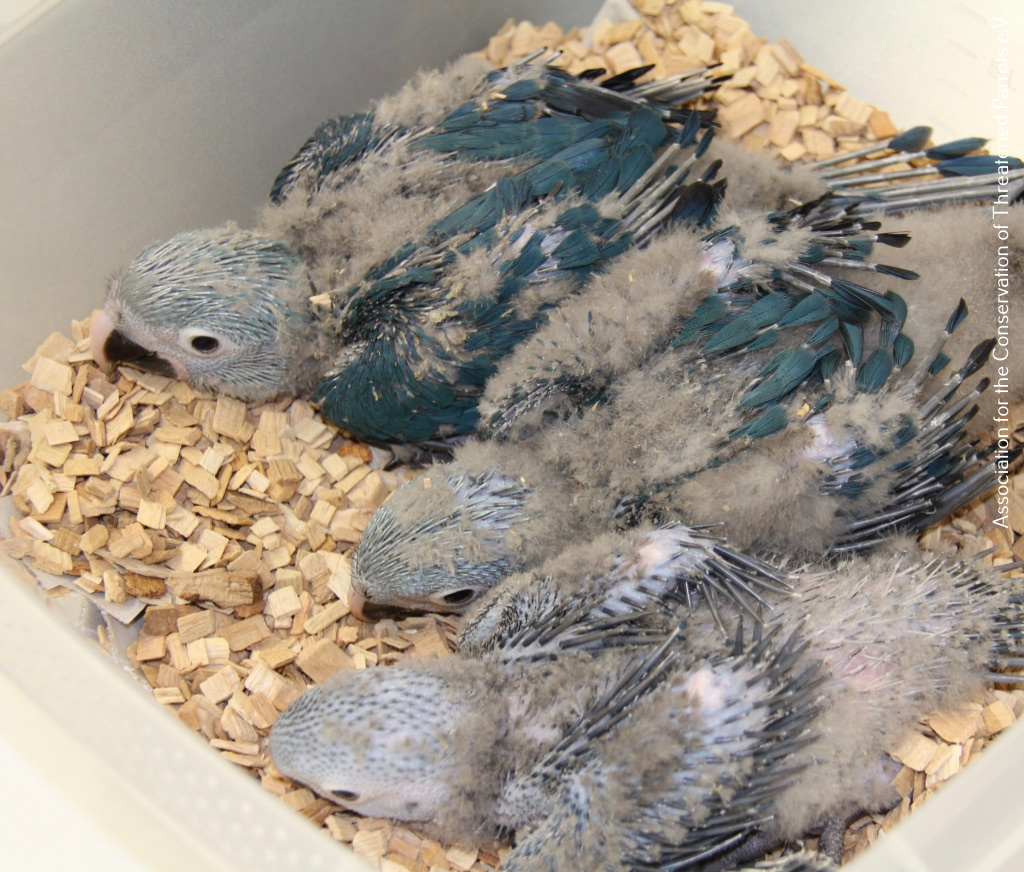