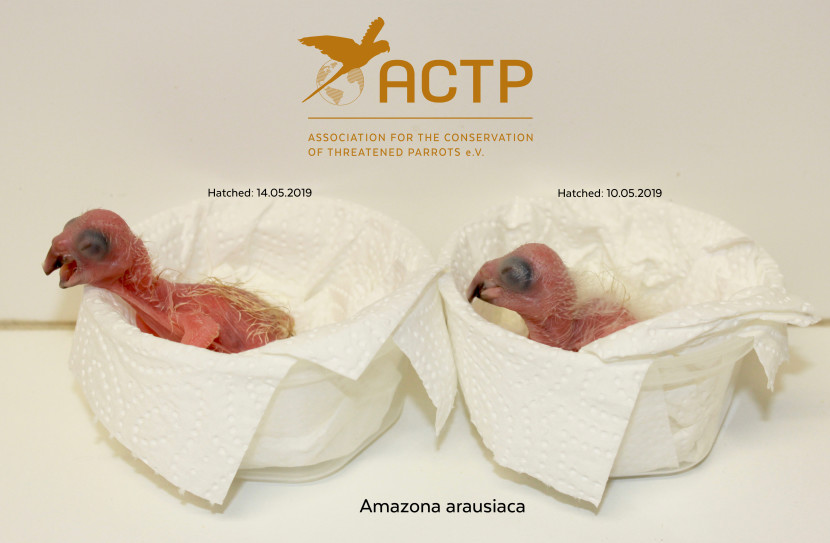 “On the 10th of May 2019 a significant hatching occurred at the ACTP breeding facility, located near Berlin, Germany; that of the world’s first captive bred Red-necked Amazon (Amazona arausiaca). “ 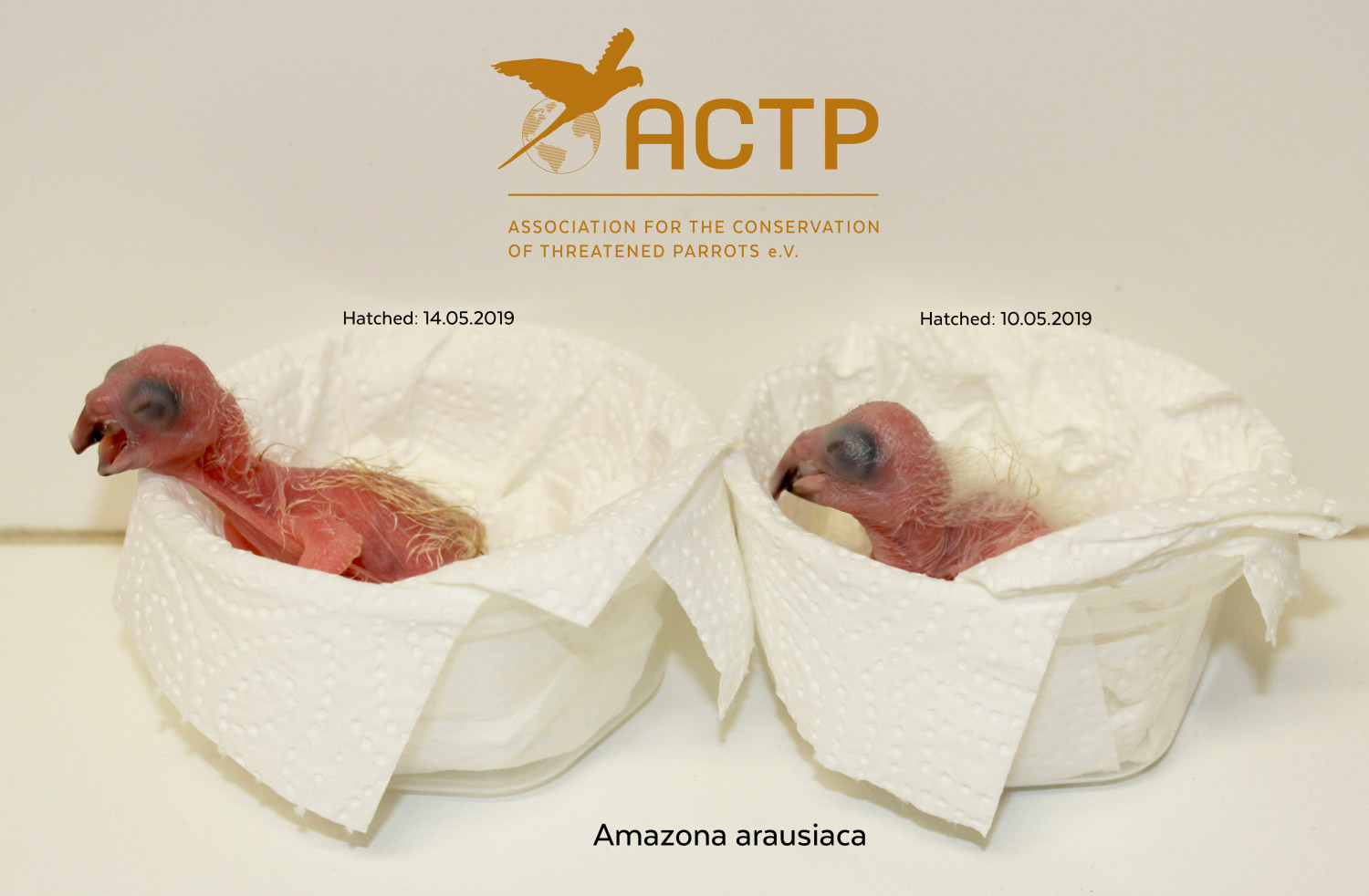 Turn the clock back a short 14 months to the 17th of March 2018 and the emergency transfer of 12 amazon parrots from the island of Dominica to the ACTP breeding facility in Germany, backed by the Government of Dominica and the German CITES authority.

This emergency transfer was initiated in response to the devastation brought upon the populations of both of Dominica’s endemic parrot species, the Red-necked Amazon (A. arausiaca) and the Imperial Amazon (A. imperialis) by Hurricane Maria in September of 2017. Dominica was struggling to come back from this devastation, they needed help, trying to care for the birds they held at their botanical gardens, when at the same time their people were in dire striates, this meant that outside help was the only way to secure the birds. It was recognised by both the Government of Dominica and German CITES authorities, that immediate action was required in order to take the necessary steps to help safeguard the survival of these two species; therefore, the joint decision to transfer the 12 parrots that were held at the aviary within the Botanical Gardens in Roseau, Dominica to ACTP’s state-of-the-art psittacine breeding centre in Germany, was taken. This decision was not taken lightly, and as per all major conservation actions, there was controversy, one can never satisfy everyone. But as with previous conservation decisions that have saved species, they too were marred with negative press until they proved their critics wrong.

With the increasing threat imposed by human induced climate change, and the increase in the frequency of high category hurricanes in the region, it is crucial, to not only work on the in situ aspects of the projects, but also on safety-net populations, to safeguard these species for generations to come. It is for this reason that ACTP and the Governments of Dominica, St Lucia and St Vincent, plus the German CITES authorities, recognise the ever-increasing need for ex situ safety-net populations of the endemic parrots of these islands to be established outside of the Caribbean Region. It is also very clearly recognised that ex situ conservation work must take place hand-in-hand with in situ conservation work; without a dedicated and long-term commitment to both, efforts to safeguard the future of these birds will not be successful. Parrots are not the only family that suffers, Hurricane Matthew in 2016 caused the collapse of the Bahama Nuthatch (Sitta insularis) from 2000 individuals to only 5. Hurricane Irma 2017 completely destroyed the native habitat of Barbuda, the endemic Barbuda warbler (Setophaga subita) is now under massive risk of extinction with their population dropping from an estimated 1000 – 2500 individuals to a number considered below 100 individuals.

ACTP recognises that a new census of the parrot species will be a crucial next step, to get a better indication of the populations of the species and show how critical these projects are for the parrots of these islands. 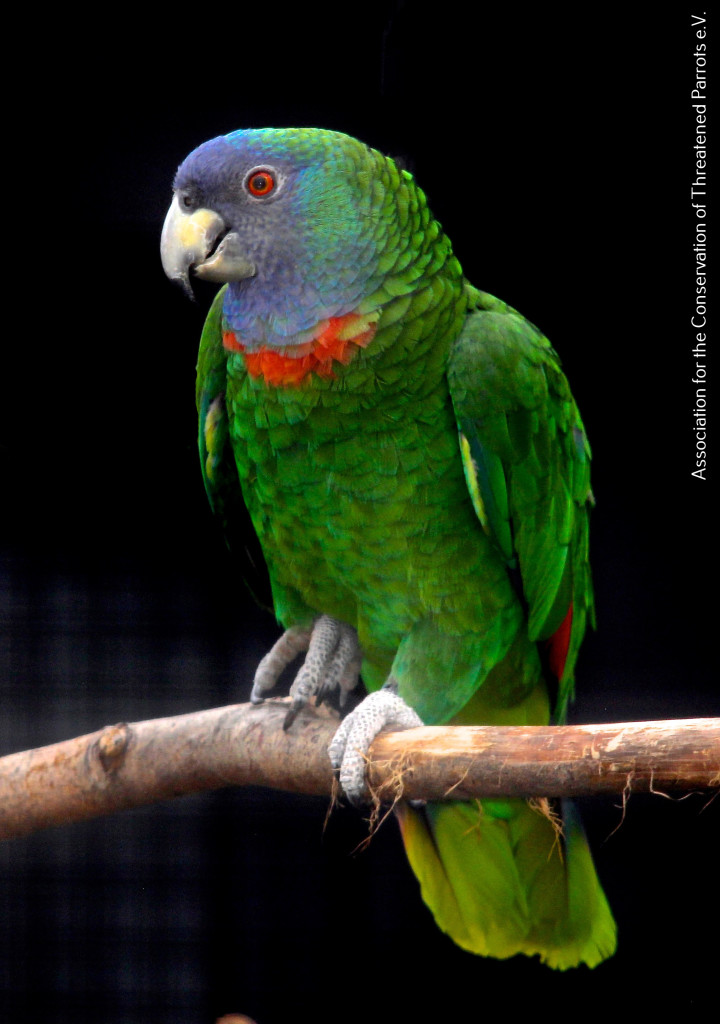 In the end, our goal in the production of a safety-net population starts with that very important word “PRODUCTION” and this is exactly what has happened here. Remember this date, the 10th May 2019; the “world first” breeding of the Red-necked Amazon (A. arausiaca), and in such a short time after their arrival at ACTP’s breeding centre in Germany. We are of course very pleased that we have been able to achieve this incredible and unprecedented success with this species, just 14 months after their arrival at our breeding centre, having been transferred to our care for this very purpose. To be able to share this success with the world, after it having been reported that such success would be most unlikely to occur, gives both, the Government of Dominica and ACTP great confidence in the decisions that have been taken so far and also the future conservation of the species. The successful pair produced 2 eggs in their clutch and the first egg hatched on the 10th May, while the second chick hatched on the 14th May 2019. All the data related to this breeding event and the future breeding events of this species is being collected and will be published in peer-reviewed journals.

Both chicks are doing well, along with a chick of an amazon species from Dominica’s sister Island, St Vincent.

We would like to thank the Commonwealth of Dominica for their trust and all respective authorities that made this important transfer to our institution happen, along with all of the others involved in this unprecedented success.

Combined with our success with the breeding of the St Vincent Amazon (A. guildingii) at our facility in Germany and the funding of in situ work on and training of Forestry staff from the Caribbean islands, we are further motivated by this latest breeding success and look forward to continuing our pioneering conservation partnerships in the Caribbean Region.